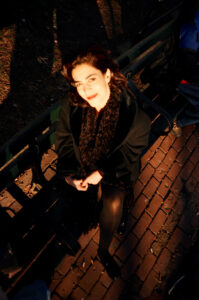 I don’t chew gum, but I say I do when asked how I can write and maintain a full time teaching position. “I can walk and chew gum at the same time.” I had never envisioned myself teaching. As an undergraduate and later graduate MFA student at a well-respected university, I envisioned myself “working in my field”. Meaning what? Editorial? Television? Theater??? It was the late 80s – early 90s and nearly everyone, or at least everyone I knew, was an English major on the path toward the much prized editorial or production assistant position. I had served my time, interning for a magazine, news programs, and even for a soap opera. My years spent reading and analyzing dramatic literature prepared me for the drama I encountered, particularly when a producer screamed at me and other interns for not putting enough vegetables on her lunch tray. Yes, one of our tasks was to ensure the producers were well nourished. We said nothing and took it. When I asked why she screamed about vegetables, I was reminded, “Once upon a time she was dishing out vegetables just like you, and someone probably screamed at her, so now she’s screaming at you.” How would that make one a better producer, or even a better human being? Again, I just took it and I guess it worked because after I graduated, I stayed for an additional year in the writer development program which gave me Writers Guild credits. I spent that year reading scripts and wrote one. My time in the program was coming to an end, as was my relationship with the show. What do you do when you’re 22? Earnestly call one of the network’s top executives to offer your ideas on enhancing programming. I was eager and humble, but also desperate to work as a writer. I could accept castigation for vegetables. I couldn’t understand it, but I could accept it. But I was not prepared for and subsequently could not accept what awaited me. It was my last week and therefore last chance to fight for the job and future I wanted. The executive took my call and listened to my breathlessly ebullient and optimistic request to present my ideas. There was a pause. Then it started. Akin to the illogical passion for vegetable portion was an equally illogical passion for this man in power to tell me I was nothing and that whatever I had written was nothing as well as many other unpleasant adjectives including the pronouncement that I’ll likely not work for him or anyone else. There was screaming, on his end, and a silent, jarring, shock on mine. The conversation ended with an invitation for us to meet in person so he could show me how angry I made him. I thanked him. Hung up the phone and left the building forever, knowing I would never be a part of that world. My teaching career was circuitous because it was something I had never wanted to do. I met an inspiring woman who suggested I give it a try because it was good and meaningful work that would lead to many adventures, and it has. I’m inspired by my students’ writing and by their desire to become better writers. My years of teaching have not interfered with my career as a playwright at all. In fact, they’ve enriched it. While teaching, I’ve had productions and readings in North America, Europe, Asia, and Africa. I’ve won prizes and grants and have been published. Everyone’s trajectory is different, but this path has worked for me. It still does.

Posted in Musings and tagged Musings.